skip to main | skip to sidebar

A couple of months back, I bought Ashok Banker's Prince of Ayodhya - and not because I especially love the Ramayana (yes, Banker's writing it all over again!). It's because I remember his Bombay novel Vertigo, as a particularly enjoyable read. Shortly after buying it though, a friend told me Banker's not a highly-rated writer. And that thought must have clouded my mind (being of the impressionable kind), because I still haven't started Prince...

Not anymore! Thanks to Amit Verma of Indian Uncut I got to read Banker's interview. It's on Sonia Faleiro's blog (these links, I say!). Even if you don't want to read Banker, read the interview. Here's an excerpt to get you going (again thanks to Verma):

"I don't think I'm a very talented writer, but I have passion. What I lack in stylistic or linguistic dexterity, and sheer artistry, I make up for with fecundity, fire and feel."

If you have the time after that, try Banker's blog.
Posted by HRV at 8:07 pm No comments:

From sport to playin’ the game

It’s been 2 ½ years and great fun. But I’ve decided to move away from sports journalism, for a while atleast. I now get to do politics and ‘general’ news, and that could mean getting down and getting my nose dirty. For, political journalism means that I will have to really hunt for stories, or soundbites whatever the case may be.

Obviously sports is really something else – as a sports journo you easily get to see people stretching their limits beyond belief. You see athletes pick themselves up after defeat and moving on. You see what goes behind their preparation. It has, and can be an unbelievably uplifting experience. And it is pure. That is what I will miss most.

So even you’re not really interested, I leave you with my top 5 moments:

Agassi beats Roddick at the Cincinnati Masters (2004)
Tennis has now got to be my favourite game. And there was nothing better than seeing an old and rusty master handing out a beating to the young turk. Andy Roddick swore and served raspingly, but Agassi pulled off searing returns and made the young ‘un run till he lost steam.

Portugal beat England (Euro 2004)
It was the height of football fever at work. And we slaved by day, and cheered ourselves hoarse during the nights. It all sort of coalesced into this one match, where England took on Portugal in the quarterfinals of the tournament. There were goals, and more goals and finally a penalty shootout. And there were about 20 of us, packed in one small room. A few of us were staunch supporters, and a few like me, shifted sides. Rip-roaring fun.

Athens 2004 Olympics
If Euro 2004 was hard work Athens 2004 was insanely gruelling. It was really my first time as Anchor (though I’d been doing our daily sports bulletin by then). What I remember most – apart from the Olympics that is, is the camaraderie our team shared. We were without two key members but gawd, did we turn on the heat.

ICC Champions trophy, England 2004
Well this was special, because it was my first time OUT of the country and the first ODI tournament I covered. What I felt during those 18-odd days is contained in an older post.

Australia beat the crap out of India at home (2004)
This series was an education. I learnt how to really read the game just by watching, while traveling with the team. We trawled through Bangalore, Chennai, Nagpur and Mumbai looking for interviews and watching sessions of play. And interviewing Shane Warne repeatedly (and when he broke the world record) was special.
Posted by HRV at 9:40 am 2 comments:

These taggers I tell you...

They’re swarming all over the place, and Sayoni has now inflicted it upon me. So here goes -

Number of books I own: Anywhere between 150 - 600. I know it sounds ridiculous, but I can’t get more specific, as they are spread between Bangalore, Bombay and Delhi.

Last book I bought/read: The Golden Compass (more famously known as Northern Lights). This novel by Philip Pullman is Part 1 of the “His dark materials” trilogy. Am currently reading the second part (borrowed) called The Subtle Knife. It’s fantasy, and exciting stuff.

5 books that mean a lot to me:

Education of a wandering man by Louis L’amour – the great granddaddy of western novels. In the course of his life he was a prizefighter, elephant handler, lumberjack, miner, soldier, seaman and of course, a writer.

Lord of the Rings trilogy – my cousin gifted it to me in 9th standard (age 13) but it took me two attempts to proceed beyond a 100 pages. I managed it in 11th standard and from then on, was hooked. It still remains a powerful influence.

Dirk Gently series – they said the Hitchhiker’s Guide to the Galaxy series was ultimate, but for me the real magic of Douglas Adams’ writing is in the two-part misadventures of Dirk Gently.

The adventures of Tom Sawyer & Huckleberry Finn by Mark Twain – Tom Sawyer was a role model, need I say more?

Psmith series by P G Wodehouse – I love all Wodehouses, but the ultimate favourite is neither Bertie nor Uncle Fred – it’s our gentle comrade!

And the relay goes on…now I nominate these two: 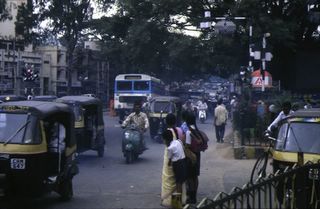 The flight attendant speaks in Kannada as well, and I begin to enjoy my flight to Bangalore in this low-cost airline. Even some of the people in the airplane seem to be speaking in my language. That's nice, because Kannada is a fast-fading tongue in my city. Okay, it isn't exactly fading, but people from other states are fast overwhelming the original 'local' population. But that's a different story...for now I've already reached Bangalore airport and I see for the first time, ads on the conveyer belt. Looks like every inch of this city is sold.

This time I resolve not to take a taxi home, but I let the friendly auto driver con me. I agree to pay 170 rupees, although I know the going rate is more like 85 bucks. I'm a fool, but he is - you guessed it - speaking Kannada, and my heart melts. Typically, he's Tamilian, but speaks Telugu as well.

The words come slowly at first: after all my Kannada has atrophied from disuse, but soon they begin to tumble out. In a day or two, the same old inflections will be back, I know. On the way home, I see people working on half-completed bridges raising clouds of dust and vehicles belching out smoke. And yet, through all this a pleasant wind is blowing.
Those bastards! How long can the city take this?

I call my mom, and tell her I'll be home in 20 minutes. I also lay down my bet: the new colour of our house is gray and white, I wager. But upon reaching, I find out it is more a tone of yellow. Ah well, it looks nicer than before.

And now, for A-Rod

So Rafael Nadal did win the French Open, and by doing so, won me a bet as well. And now my money's on Andy Roddick for Wimbledon. Just a hunch - not many give him a chance anyway. Read this.
Posted by HRV at 10:52 am 2 comments:

Let me introduce myself